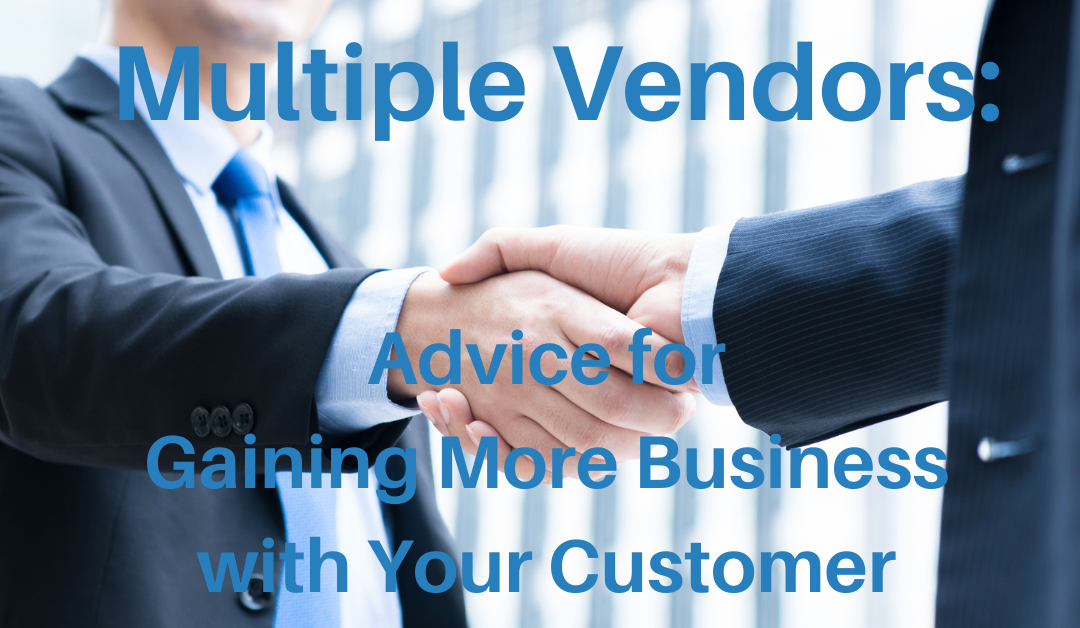 What do we do when a customer wants to spread the business between multiple vendors, even though I know we can provide better service?

If you are looking for a short, easy solution, there isn’t any. The solution to this, like so many sales problems, is a matter of a long term, consistent approach on your part.  There is probably nothing you can say or do, in the short term, that will impact this.

Clearly, spreading the business around between multiple vendors is the customer’s philosophical approach to purchasing.  He/she probably has arrived at this approach through some combination of personal experience and/or executive direction.  The customer holds this position because at some time he thought it was the best approach for his business.

Here’s a pretty effective rule for sales strategy: When your customer voices a firmly held position, do not attack that position. You’ll just harden their positions and make life difficult for yourself.  Instead, go around that position.

In other words, retreat a bit, change the subject and look for an opportunity on the specific, rather than the general, level. Leave the philosophical approach unaddressed.  Instead, show him why, in one specific opportunity after another, you are the best choice.  Do that over and over again, and, hopefully, he’ll discover himself buying more from you than your competitors.  He’ll never have to publicly change his position; he’ll just find himself acting differently.

That’s the most effective approach.  But that isn’t the only strategy.  You may, for example, take a bit of a round-about approach to the issue. Realize that you have to influence the customer to change his opinion, to change his beliefs, and instead to believe that doing more of his purchasing from one vendor (you) is a better idea.  Put yourself in the customer’s shoes.  If you were him, what would convince you to change your beliefs?

Start by digging into the customer’s head.  What is more important to him when it comes to making a decision: price, quality, service, ease of doing business, etc.?

One way to do that is to have a discussion with him on the reasons he chose you as a vendor in the first place.  What does he see in you and your company that is positive?  Why is he doing any business with you? (This, by the way, is an eye-opening question to ask of all of your customers.)

Once you uncover your customer’s priorities, then you can work to fulfill his expectations in that regard.  Over time, show him by your company’s performance and your attention, that your company gives him everything that he wants.

At some point, it will be helpful to have a discussion about doing more business with him.  You can approach this in two ways:  The general, philosophical approach or the more specific, opportunity focused approach.

By the general, philosophical approach, I mean that you address, head-on, his philosophical position.  Start with this question, which is, by the way, one of the all-time great sales questions: “What has to change for us to do more business here?”  That should stimulate a conversation that can lead to you suggesting a change in his position.  For some customers, this approach can be influential.

For most customers, however, the other strategy – specific opportunities as opposed to general philosophy — will be more effective.

This is one of the most difficult sales situations for the salesperson,  because the customer’s deeply held values prevent you, at least in the short term, from increasing the business.  Before you decide to spend the time and effort to try to change the situation, make a cold-hearted, rational decision about the likelihood of you being successful in this account.  It may be that your time is better spent on other accounts.

One of the greatest aspects of the sales profession is that there is always another challenge out there.  You don’t sell them all.  If you did, it would get boring, and the job would be done by someone with half of your ability.  This is one of those challenges that may frustrate you for years.  Take the long term approach and be determined to eventually succeed.