The lost art of saying “NO” 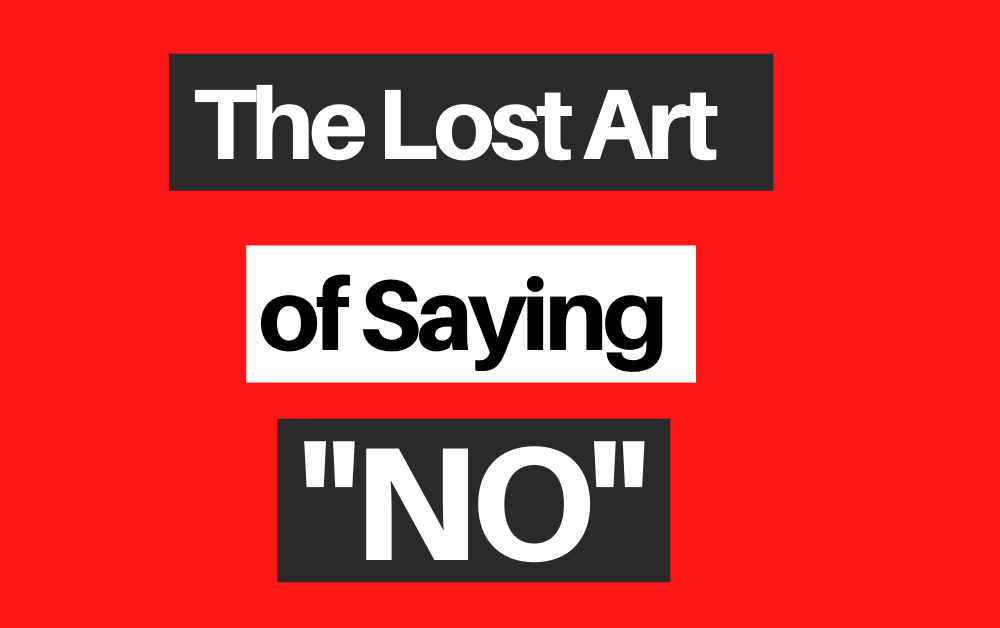 It seems like more and more business people have lost the ability to say no. See if this experience doesn’t sound familiar.  I had met with an individual, talked with him personally, and invited him to a small group meeting.  He came, interacted positively, and indicated he would commit to being a part of the ongoing meeting.  Then, he went dark. For three weeks, he would not return phone calls nor reply to Emails.  From my perspective, he dropped off the planet.

Now, we all know what happened.

For some reason, he couldn’t say no.  I wish this one instance, and this one person was a rare case – an exception to the general rule.  Unfortunately, he is hardly the exception.  I have this experience a least once a month.  Someone with whom I have had several conversations literally drops off the planet and goes dark.

Evidently, much of the business community has lost the ability to say no.

That’s too bad.  Being able to say no is a higher-level skill that is advantageous in both businesses as well as life in general. Those who don’t master the art of saying no are forever doomed to immaturity in their business skills, while those who can and do say no operate at a higher level of skill and social finesse.

Let’s look at no from two perspectives:  First, the person who is spoken to, the receiver of no, and second, let’s look at it from the perspective of the no-sayer.

The receiver of “No”

When you are on the receiving end of “no”, initially, it doesn’t feel good.  It confirms rejection.  However, it is quick, decisive, and you know where you stand.  While you may wonder about the motives of the no-sayer, you can respect him or her for honestly communicating.

The alternative is far more detrimental.  The person who could say no chooses instead to avoid the word.  That usually means they avoid communication and just drop out of the loop.

Now you’re left with reaching out to them.  You make multiple calls, emails, leave phone messages, reach out through social media. So, the process of finally understanding that the lack of communication really means no can take weeks of effort.  The lack of hearing an honest no is a time-consuming process, time-wasting process.

You are left with a number of negative impressions. The strategy of going dark and hiding really degrades both of you. First, you have to question a person’s lack of courage and thwarted social skills.  Really, this is how you were raised?  You can’t help but view the hider as less of a person.

Then, of course, you realize that the lack of no carries with it the message that this person really doesn’t think very highly of you.  He/she has no respect for you and thinks nothing of wasting your time and squandering your emotional energy on this relationship.

The net result of hiding instead of saying no is that both of you are diminished.

Let’s look at it from the no-sayer’s perspective.  Hiding from communication is really an immature response.  It indicates a lack of social skills and an undeveloped personal identity. As a communication strategy, it causes all the negative repercussions discussed above.

On the other hand, the ability to say no is a higher-order skill, indicative of a more mature, more developed psyche.  When you can, quickly and decisively, say no, it indicates that you have a focus and a set of guidelines to shape your decisions.  The decision being considered doesn’t fit those guidelines, so a prompt no allows you and the other person to move along.

‘No’ is a time management strategy. There is only so much time, and the demands on our time are greater now than at any time in the past.  Saying no to something that is clearly outside of your focus, that doesn’t move you closer to your vision or your goals is a powerful time management technique.  When you say no, you free your time, and your emotional and intellectual energy to invest in something that is closer to what you want.  Not deciding, or deciding and not communicating, adds hours of wasted effort.

If we don’t say no and played with every offer made to us, if we entertained every ‘too good to be true’ deal in today’s barrage of emails, we would be spinning our wheels forever.  The enemy of the best thing is the good thing, and we need to cultivate the ability to say no to those offers and people who sound good but ultimately direct our attention away from the best.

The ability to say no is a higher-order skill, indicative of a mature personality who knows what he/she wants and has a personal presence to communicate that directly.

Unfortunately, there are few who meet that standard.

Receive insights and ideas like this every week, delivered to your inbox.